About INTOSAI Governing Board

The Governing Board of INTOSAI (GBI) is composed of 18 members. As a rule, it meets annually between Congresses. To ensure balanced representation of all member countries, each of INTOSAI's seven regional working groups and the main types of public auditing systems are represented on the Board.

The INTOSAI Development Initiative and the International Journal of Government Auditing are also represented on GBI.

The Chairman of the Board is the head of the SAI that hosted the last congress.

1)  The tasks of the Governing Board are:

a) to take in the time between Congress es all measures deemed by it necessary to attain INTOSAI’s aims, including, in particular, performance of the tasks assigned to the Governing Board by the Congress;

b) to determine whether the qualifications of the Supreme Audit Institutions wishing to join INTOSAI meet admission requirements and to decide on their admission;

c) to recognize Regional Working Groups wishing to cooperate as such within INTOSAI;

e) to adopt the triennial budget, including any recommendations for the adjustment of membership dues, and submit it to the Congress;

f) to adopt the annual budgets, also in consideration of the implementation of the Strategic Plan of INTOSAI;

g) to review and accept the annual report of the General Secretariat described in Article 6, paragraph 1 (f) and to submit it together with its own comments to the Congress for approval.

2)  The Governing Board will be composed of 18 members, as follows:

a) the heads of the Supreme Audit Institutions of the countries in which the last three Congress es were held;

b) the head of the Supreme Audit Institution of the country designated for hosting the next Congress;

d) the heads of the Supreme Audit Institutions responsible for the International Journal of Government Auditing and the INTOSAI Development Initiative (IDI) will be recommended by a resolution of the Governing Board and elected by the Congress for six-year renewable terms;

e) eleven members elected by Congress for a period of six years, being eligible for re-election.

SAI of Slovakia at INTOSAI Governing Board in Abu Dhabi 2015

The SAI of Slovakia Vice-President Igor Šulaj with delegation attended the INTOSAI 67th Governing Board (GB) meeting in Abu Dhabi at the beginning of November 2015. SAI of Slovakia, as the INTOSAI Sub-Committee on peer review chair, participates at the GB deliberation as non-voting member. 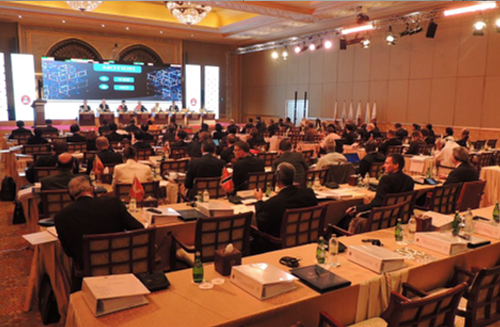 Igor Šulaj submitted to Governing Board a report about the INTOSAI Sub-Committee on peer review activities for the last year. He presented the Sub-Committee work on the ISSAI 5600 – Guideline on Peer Review – along suggestion about the Sub-Committee further activities in up-coming time; the Governing Board has taken a note of the report and a fact that the revised ISSAI 5600 was put on ISSAI web site for comments along the INTOSAI due process. After working in the received amendments, the ISSAI 5600 will be translated into all INTOSAI official languages and put before the INOCOSAI in Abu Dhabi in December 2016 for approval. 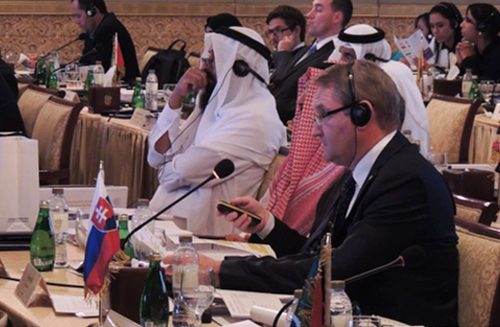 Igor Šulaj presenting the report to Governing Board